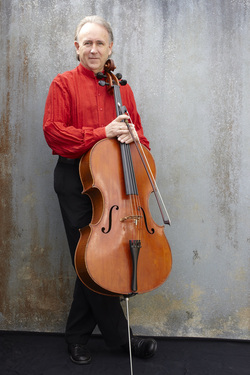 Cellist, James Tennant, has enjoyed an esteemed and lively career as a concert cellist, chamber musician, teacher and arts instigator throughout many continents of the world, nevertheless, he calls New Zealand home.

James’ main artistic inspirations through the years have been William Pleeth, Arthur Rubinstein, Gidon Kremer, Natalia Makarova and Bruce Lee, all who have played an important role in developing his artistic vision. As a cellist, James has studied with William Pleeth and Jerome Jelinek while enjoying master classes with Janos Starker, Gregor Piatigorsky and Leonard Rose.  He graduated with Distinction from the Interlochen Arts Academy and the University of Michigan, and during these years performed with the Detroit Symphony Orchestra under such inspirational conductors as Klaus Tennstedt, Fruhbeck de Burgos and Leonard Bernstein, and for pocket money he recorded with all the Motown greats of the 70’s.


As a chamber musician, James was a founding member of the Trio Mozart, Vivo String Quartet, Ogen Trio and the New Zealand Chamber Soloists and has performed regularly with pianist Katherine Austin as the Tennant-Austin Duo.

James has conducted orchestras in the USA, Colombia and New Zealand including the St. Matthews Chamber Orchestra, Orquesta de Camera de Bogota, Ensemble Musical de Popayan and the University of Waikato Chamber Orchestra, with whom he was the Music Director of five world premieres of operas by David Griffiths.

At present James is currently Head of Cello Studies, Chamber Music and Orchestral Studies at the Conservatorium of Music of the University of Waikato. He has created a unique Soloist Specialisation course and along with other performance staff, offers over 70 concerts a year for the students to develop their expressive personalities through regular performance opportunities. With his Conservatorium of Music students, he has created the ensemble Cellophonics - New Zealand’s highly regarded cello ensemble - and for the past 14 years been its Musical Director.