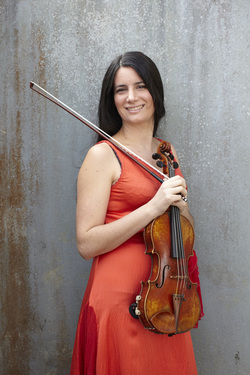 Leading NZ violinist, Dr Lara Hall began performing as soloist around New Zealand at a very early age, having won the New Zealand National Schools Chamber Music Competition at age 15 and 16. Lara has gone on to become recognised nationally and internationally as a vibrant and virtuosic performer - in demand equally as soloist, orchestral concert-master, chamber musician and baroque specialist.

Lara was raised in Auckland and gained her BMus at the University of Auckland, while studying with Mary O’Brien, and then an Advanced Diploma in baroque violin, which she studied with Graham McPhail, thus cementing a love and expertise in both musical genres.

Lara then studied extensively in the USA, starting in the Dorothy Delay studio at the Aspen Summer School. She then gained her Masters and Doctoral degrees at the University of Michigan where she studied with Paul Kantor and Yehonatan Berick. During that time, she taught as a Graduate Student Instructor and was also a faculty member for the pre-University programme Young Strings. She attended numerous master classes, including one given by the eminent violinist Ruggiero Ricci from whom she received high praise.

A passionate teacher, Lara is lecturer at the University of Waikato, teaching violin and viola. Her students have achieved success at a national level.

Lara displays an unusual degree of versatility. As well as her teaching career, she is the only musician to have performed in Chamber Music New Zealand’s main series concerts variously on violin, viola, and baroque violin.

In addition to the recordings with the New Zealand Chamber Soloists, Lara has released two other CDs on the Atoll label, with two future releases imminent.

Concertmaster of the Waikato and Bay of Plenty’s Opus orchestra since 2006, Lara has been leader of numerous other orchestras including the National Youth Orchestra, the Auckland Chamber Orchestra, and the Auckland Philharmonia Orchestra.